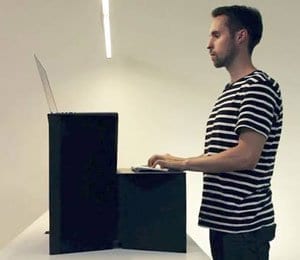 One of Canada’s leading high-tech entrepreneurs has turned a low-tech solution to his back problems into a new venture that he hopes will reshape the office furniture business.

Ryan Holmes was recovering from a painful back injury four years ago when his doctor suggested that the chief executive officer of Vancouver social media management firm Hootsuite Media Inc. work at a stand-up desk to help with his recovery. Established office furniture solutions cost hundreds of dollars, so Mr. Holmes came up with a simple alternative: propping his laptop on a cardboard box atop his desk so he could work while standing.

While any child could have conjured up that solution, his next idea was to turn that simple hack into a sophisticated out-of-the-box business idea: making and selling a cheap, stand-up desk out of cardboard that can be folded up, carried anywhere, stored easily, and sold for a fraction of the price of competing products.

His stand-up startup, Oristand, launched Wednesday, selling the two-pound product online for $25 (U.S.) or five for $100. “I anticipate we’ll see a lot of brands that want to use this as their stand-up desk solution,” said Mr. Holmes, who is executive chairman but not involved in day-to-day operations. “We’re disrupting IKEA.”

While the product looks simple – it’s made of uncoated, 100-per-cent recyclable industrial cardboard and requires no assembly or screws – it’s the result of three years of design, testing and market development.

The concept grew out of Mr. Holmes’ makeshift solution, a phone book propped up on an empty bulk lollipop box from Costco on his desk. “It was always falling over and kind of crappy,” he said.

So in 2013, he reached out through a mutual friend to Steve Suchy, an architect and designer with a furniture maker in Vancouver, with an idea for an inexpensive folding, portable desktop stand. “I thought it was a brilliant idea, and I thought it was possible,” Mr. Suchy said.

Mr. Suchy created a cardboard concept that could fold out from a flattened pile into a two-step stand, with a lower shelf for a keyboard and a flat top for the laptop.

“It was a real trick to find a double-tier design solution that incorporated effortless opening and closing, and ensured it was strong enough,” Mr. Suchy said. “All the folds reinforce each other and the exposed edges are on the sides so those you contact are soft and nice to the touch.”

The trio filed patents and looked for a manufacturer, striking out in Vancouver before eventually selecting the Seattle company that makes boxes for Nike shoes. They developed six prototypes to ensure the product was functional, foldable, sturdy and shippable.

Mr. Holmes, who has invested in dozens of tech startups, said “it has been really refreshing for me to do a real-world, hard-good, bricks-and-mortar business. Oristand doesn’t have the scalability of digital delivery and is logistically intensive, but … when it all comes together, it’s super exciting.” He’s hoping the company will encourage “health and happiness” by spurring more people to get out of their office chairs.

Though Oristand offers a physical product, in other ways the company is as disruptive as a tech startup – offering a radically cheaper alternative to established products on the market. Oristand has employed some methods used by software companies, including “A/B testing” to determine which marketing approaches score best online with potential customers, and by refining the product through a series of iterations (Mr. Holmes has used all six prototypes). Development costs to date are less than $100,000, typical of shoestring spending by early-stage tech startups.

The company’s ambitions are not as grand as those of Hootsuite, which has raised hundreds of millions of dollars in venture financing and is expected to go public. But Mr. Holmes would love to see Oristand’s products distributed through large retail channels, and for big employers to buy in bulk and pay to have their corporate logos printed on the sides.

“I don’t know how big [Oristand] will be,” Mr. Holmes said. “If this is an average economic success, I’ll be happy.”

Commentary: Stand up workstations help to decrease pressure on the discs of the spine as well as reducing postural muscle tension. One could also look at integrating Active Release Therapy in order to help keep postural overload issues at a minimum.

As of April 5th, our clinic will be transitioning to optional masking for patients, practitioners and staff based upon our Association(s) Guidelines. If you would like your practitioner to wear a mask during treatment or have any concerns, please give us a call to make arrangements for your upcoming appointment and it will be noted on your file. … END_OF_DOCUMENT_TOKEN_TO_BE_REPLACED

In light of the Government of Alberta's announcement on September 15th, we are currently keeping our existing measures in place including mandatory masking, daily screening of patients, practitioners and staff, and regular disinfecting measures in the clinic. Thank you for your continued support! … END_OF_DOCUMENT_TOKEN_TO_BE_REPLACED

As of April 5th, our clinic will be transitioning to optional masking for patients, practitioners and staff based upon our Association(s) Guidelines. If you would like your practitioner to wear a mask … END_OF_DOCUMENT_TOKEN_TO_BE_REPLACED

When sleeping, place a pillow under your knees when lying on your back or between your knees when on your side in order to keep your spine relaxed and in a proper position … END_OF_DOCUMENT_TOKEN_TO_BE_REPLACED